North Dakota’s premier mixed-use development, Williston Crossing, is moving full steam ahead. The Williams County Board of County Commissioners today granted entitlement for the development by a vote of three to two. Stropiq, Inc., the international real estate principals behind the ambitious retail-driven project will now move forward into the pre-leasing stage. 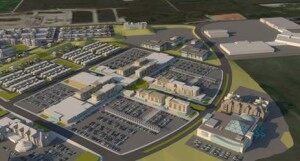 Stropiq, Inc. and its advisor JLL, plan to gauge and secure retailer interest as part of the next phase of the project at the upcoming International Council of Shopping Centers Real Estate Conference in Las Vegas in May. The first phase of the development is slated to include 350,000 square feet of retail space, which would ideally include a theater, restaurants and retail stores. Stropiq expects to break ground on the project as early as 2016.  Subsequent phases of the development will be based on growth and demand, but at completion Williston Crossing is expected to encompass approximately one million square feet of retail and entertainment, plus a hotel and waterpark space, with a mix of office and multifamily options.

“Having spent two decades in emerging markets before returning to North Dakota, I’ve seen how transformative a development like this can be for a region,” said Stropiq Principal Terry Olin. “We were very impressed with the County Commission’s careful consideration of Williston Crossing and are looking forward to the day they will join us with shovels in hand to break ground on this exciting development.”

According to a recent survey conducted by JLL and Stropiq of Williams County and City of Williston residents, nearly 96 percent of respondents indicated that region doesn’t have enough retail options to satisfy their needs. When asked how respondents feel about Williston Crossing being built in in their community, nearly 78 percent said “thrilled,” with nearly 85 percent indicating they believe the Williston Crossing project will improve their quality of life.

“How it is even possible that the 30,000 residents of Williston – the Bakken Shale’s de facto capital – have literally one store in which a men’s suit can be bought within 125 miles?” said Stropiq’s other Principal, Ellen Simone Weyrauch. “In a region the size of Switzerland, Williston Crossing will make an immediate impact for residents, expanding their retail horizons exponentially.”

Williston Crossing will be constructed in the “Dakota Modern” theme, a design concept created by Gensler, the master architects on the project, which brings together man-made and natural materials to reflect regional character and local style. The location is the intersection of Highway 2 and the NW Bypass just north of the city of Williston. JLL has been advising on the project since its inception. To learn more visit: http://www.us.jll.com/united-states/en-us/services/industries/retail/williston-crossing