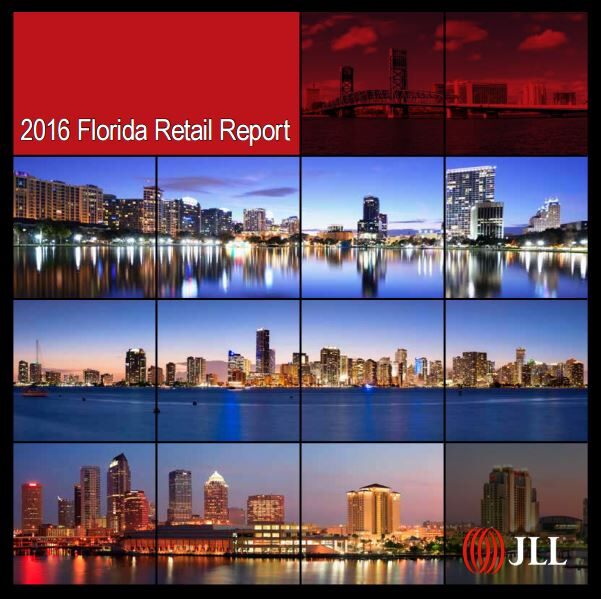 In the first half of 2016, Florida’s retail sector witnessed tremendous positive leasing momentum with room to run before any clouds roll in and the market contracts, according to JLL’s Florida Retail report launched today at ICSC’s Florida Deal Making Conference. For the first time since 2008, the top 14 Florida retail cities are rising or peaking, and most have an occupancy above 90 percent with rents rising steadily for the past three years.

“The key theme emerging in Florida’s retail sector is momentum,” said Justin Greider, Vice President of Retail, JLL. “While the recovery has commenced in major markets for several years, rents and occupancy had lagged behind in many secondary and tertiary markets of the state. Retailers were hesitant to move outside of core, Class-A markets – but that is changing now.”

In the last three years, retailers have leased 10.8 million square feet of space in the state, and the following regions have felt the impact in different ways:

• West Florida is the hottest region of the state right now, with Tampa experiencing 14 straight quarters of positive absorption and the largest increase in rents year-to-date of $0.50 per square foot. The Sarasota / Bradenton market has more stability than it has witnessed in a decade, with rents exceeding pre-recession highs. Ft. Myers still has some volatility in rents, but tenants have leased nearly one million square feet in the past four years, and Naples rents are at all-time highs, and exceed all markets in the state outside of South Florida.

• North Florida is poised to see moderate growth during the next year, with both Jacksonville and the Panhandle seeing consistent growth during the past 18 months in rent and occupancy. Tallahassee is topping out with occupancy approaching 94 percent but there is new product that will absorb during the next 12 months at rates higher than the market average.

• South Florida is still strong but the pace has slowed. Palm Beach County saw strong rent and occupancy increases, as they have lagged behind the rest of the region, and still have some room to run. Broward / Ft. Lauderdale has seen the rent growth of the past four years leveling off, but a strong development pipeline will be adding some good quality product to the mix. Miami is still the strongest market in the Southeast, but retailers have drawn the line in the sand for how much they will stretch to be in the market.

• Central Florida is finally feeling broad-based recovery with Orlando as one of the last markets in the state to see rents rise. Leasing activity in suburban areas has pushed rents up for the first time since the downturn. Daytona, Lakeland, Ocala and Port St Lucie have seen consistent improvement over the past 18 months.

“Florida, and in particular South Florida, remains crucial to both retailer’s and landlord’s portfolios but the tightening market has created oversized demand for new inventory, and it’s being delivered along with an increase in rents. South Florida has 3.2 million square feet of new construction in the pipeline, just behind Houston and Dallas nationally,” added Andy Carlson, Vice President of Retail, JLL. “We expect the outlook for Florida to be bright over the next 18 months even with select markets like Tallahassee and Miami peaking with rent decline. There is still an opportunity for overall growth in Florida.”